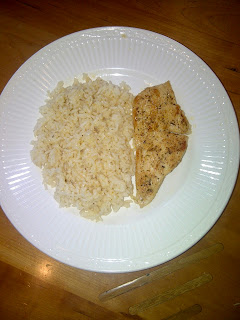 I’m going to start posting our dinners at least twice a week, along with the recipes.  Most of these recipes can be found in my GFCF or Feingold Cookbooks on the far left.  I’ll try to get as many pictures up as I can as well.  So long as I can get the picture taken before my kids get to it!  I turned around to get a fork and knife to cut up the chicken to find my little one with her face in the plate already. 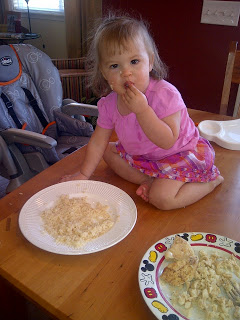 You can now sign up to receive e-mails notifications every time I have a new post.  The link to sign up is on the top left of my blog.  I also have a new Facebook account set up just for All Natural Mom.

I’ll post what we’re having for dinner on there as well.  I may set up a Twitter account too if that’s something that’s easier for people.

Here’s what he had a couple days ago.  Below is the recipe.  We have this one about once a week or so.  Whenver I have chicken breasts laid out and don’t know what to do with them, I usually make this because it’s the easiest.  That, or chicken nuggets.  I make a double batch (or more) of the spices for this, and keep it in a jar labeled “Garlic Lime Chicken.”

For the rice, I have used Uncle Ben’s 5-Minute Rice, but I’ve been trying to get away from that.  Rice that is not organic has arsenic in it.  So, I’ve switched to Lundberg’s Organic Long Grain White Rice.  Yes, brown rice is better, but my kids have a harder time digesting it so we have to use white.

It took me a while to adjust to cooking with organic rice and not the 5-minute rice.  The directions say to use 1 to 1 1/2 cups of water.  I figured out I need to use 2 cups at least, and I use chicken broth instead of water, just for more nutrients and a better taste, but water is fine too.  I also figured out I need to lower the flame to as low as possible, on my “Simmer” one.  Otherwise, it cooks too fast and burns.  I also check on it after about 15 minutes (it says to cook for 20) and if it looks like the liquid is almost gone, I add a little more water or chicken broth.  I use Pacific Organic Chicken Broth or homemade that I keep on hand frozen.

½
to 1 tsp pepper (I use ½ for low oxalate, but recipe calls for 1)
1
tsp garlic powder
½
tsp onion powder
½
tsp thyme
¼
tsp paprika
¼
tsp cayenne pepper
2
TB ghee or butter
2
TB olive oil
½
cup chicken broth (I use Pacific organic)
4
TB fresh lime juice
4
boneless skinless chicken breasts (I use Organic Smart Chicken brand from Woodman’s)
In
a bowl, mix together the seasonings.
Sprinkle mixture onto both sides of the chicken breasts.  I use about ¼  tsp of the seasonings on each side of a large
organic chicken breast.  How much you use
depends on how spicy you want it.  I like
it spicier, but then my kids won’t eat it.
1/4 tsp on each side, seems to work.
In a skillet, heat butter and oil over medium high heat.
Saute chicken until golden brown, about 5-7
minutes on each side.  Turn down the heat
and remove chicken and keep warm (put a plate over them).  Add the lime juice and chicken broth to the
pan, whisking up any browned bits off the bottom of the skillet.  Keep cooking a couple minutes until the sauce
has reduced slightly.  Add chicken back
to the pan to thoroughly coat with mixture and serve.
I like to serve with rice and drizzle some
of the lime juice mixture over it.  If
you don’t have limes or chicken broth handy, you could skip the last part.  (I’ve used a lemon before too when I didn’t have a lime.) I double the above recipe, and keep the
seasonings in a jar for when I make this.
We make this often.
*Adapted
from a recipe on www.flylady.com.
Written by Sheri Fortes - Visit Website

Posted in Miscellaneous and tagged What's for Dinner?.