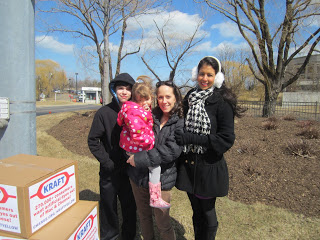 Just got back from Kraft Headquarters in Northfield, IL where Vani Hari, AKA Food Babe, delivered a petition with over 277,000 signatures asking Kraft to remove yellow dyes from all Kraft macaroni and cheese products. Kraft has already removed yellow dyes from their mac-n-cheeses in the UK. Why not the U.S. too? Kraft claims that Americans do not want yellow dyes removed. I beg to differ. Most Americans are just uninformed about the dangers of dyes and the magnitude of products that contain dyes.

Below is an excerpt from my book, “All Natural Mom’s Guide to the Feingold Diet.“

In an article entitled “Food Dyes: A Rainbow of Risks”, The Center for Science in the Public Interest states “In addition to considerations of organ damage, cancer, birth defects, and allergic reactions, mixtures of dyes (and Yellow 5 tested alone) cause hyperactivity and other behavioral problems in some children. Because of that concern, the British government advised companies to stop using most food dyes by the end of 2009, and the European Union is requiring a warning notice on most dye containing foods after July20, 2010.” (1)

The warning labels on dyes in the United Kingdom say, “May havean adverse effect on activity and attention in children.” (2) A parent reading this warning on a label is likely going to put that food back on the shelf. Instead of warning (and scaring off) consumers, big food companies like Mars and McDonald’s have chosen instead to use natural colorings in countries where the labels are now required (not in the U.S.).


In Europe, Skittles, Starburst ®, and M&M’s ® are all colored from natural sources such as red cabbage or carrot juice instead of dyes. A strawberry sundae from a McDonald’s in the U.K. is colored red with strawberries instead of red dyes. (3)

In 2011, the Feingold Association and a few other agencies triedto convince the United States government to at least put warning labels on dyes. (4) It failed to pass by a couple of votes. I guess we’re getting there. Hopefully we’ll catch up to other countries one day and ban them altogether.

Food Babe has been trying to sit down with Kraft to discuss the removal of yellow dyes from their mac-n-cheese with no success…until today! With the help of www.change.org and a petition with over a quarter of a million signatures, Kraft finally agreed to let Vani past security and into Kraft headquarters to sit down and chat with Kraft. 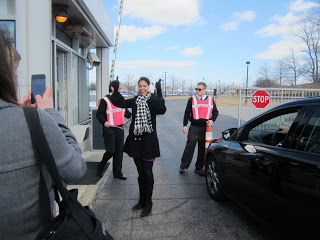 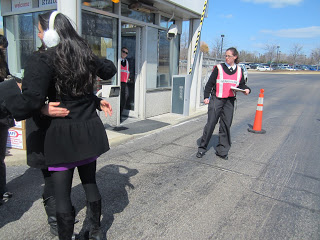 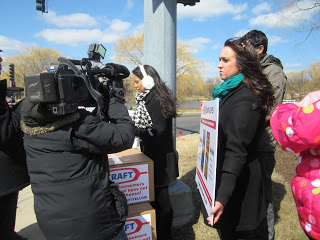 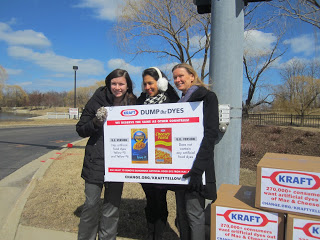 I hope Vani talking with Kraft raises awareness with these big food manufacturers that we want these harmful additives removed from our foods. Kraft mac-n-cheese is a big one because so many kids are raised on this and if your child orders mac-n-cheese from a restaurant, they very well may be eating Kraft mac-n-cheese. 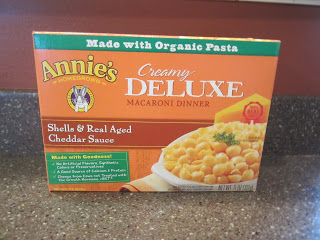 Alone we are only one voice, but together we can make a difference!
If you want to voice your concern to Kraft and ask them to remove yellow dyes from their mac-n-cheese, you can call them at 847-646-2000. Kraft needs to hear that we as Americans do NOT want yellow dyes in our foods. I called and left a message a couple of weeks ago. I have yet to hear back. You can also leave Kraft a note on their Facebook page.

Later this week, Food Babe is meeting with McDonald’s, whose headquarters are in Oak Brook, IL.

Can’t wait to hear what Kraft had to say! I’m sure Vani will be posting about it very soon! She was very excited to get past the barrage of security guards to go into the “secret” place. It kills me how our schools with our precious children in them are left unguarded, but any large food manufacturer has tighter security than the White House. And across the street from Kraft?…Whole Foods. 🙂