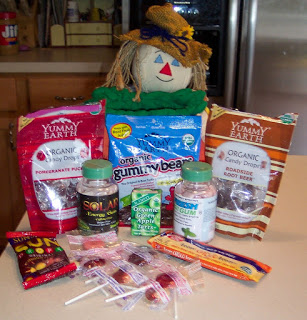 Update: For more ideas and pictures of candy, visit my Pinterest board, Feingold Candy and Gum. There are a lot more candies available now at places like Wal-Mart and Target. 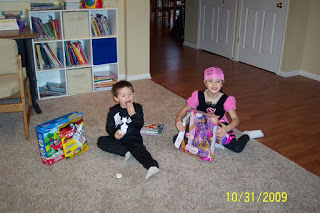 Two of my kids with their “Great Pumpkin” toys.

Many people think that Halloween can’t be any fun for a kid if they can’t eat the candy they get trick-or-treating, but I’d have to think otherwise.  I don’t think Halloween is just about getting candy.  There’s the fun of dressing up in your favorite costume, seeing all your friends in the neighborhood, being out walking around after dark, seeing all the spooky decorated houses, running to answer the door when another trick-or-treater comes, seeing how much candy you can collect, carving pumpkins, picking apples, and watching fun classic Halloween movies on TV like Charlie Brown with your family.

And then of course there’s eating candy.  Above is a picture of some of the candy my kids can eat and like.  I put some of this candy in their candy buckets before we head out the door so they don’t have to drool over the candy they get (they usually don’t anyway).  My youngest son had a Yummy Earth sucker and a Surf Sweet gummy worm before we left , and he didn’t touch the rest while out trick-or-treating.  He was too interested in all the costumes and running from door to door collecting as much candy as he could for the “Great Pumpkin.”

Who’s the “Great Pumpkin?”  This year, we heard of another GFCF family who does the Great Pumpkin.  The kids go out trick-or-treating, and at night, they put their candy buckets in a set location.  The Great Pumpkin comes in the middle of the night and takes the candy, and leaves behind presents for the kids in exchange for the candy.

When they handed me their candy buckets (and they were happy to do so), I gave them a bag filled with goodies.  My youngest got a Mickey Mouse Lego set and a Cars magic marker coloring book.  My daughter got a Three Musketeers Barbie Princess painting book.  They also got to eat some of their Feingold approved candy.  They had some Surf Sweet jelly beans and a Giambri’s lemon stick.

My oldest got a new video game and a yo-yo.  He decided that he should get one gift for every 100 pieces of candy he collected.  He was excited to go trick-or-treating because this year we let him go with an older friend by themselves.  He also decided he was too old for a candy bucket, and felt cool walking around with a pillow case like the older kids.  He said he was going to fill the pillow case with candy and sleep on it.  Then we let him have a sleep over.

We did let my 9 year old have one piece of Halloween candy as his “once a year candy.”  He chose a Reeses peanut butter cup.  Each Halloween, we let him have one piece of his Halloween candy, but it has to be on a weekend, so if Halloween falls on a Wednesday, he has to wait till Friday to eat it.  This way, any reaction might have dissipated by Monday for school.  He usually does end up getting some candy that is approved like Mary Jane’s (the old fashioned candy in the orange or black wrappers.  I hated getting these when I was little, but they like them).

He also got some Utz pretzels while trick-or-treating, and a Scooby Doo VHS movie!  🙂  Nice.  He also got to eat some of the approved candy above.  However, even with their Feingold approved candy, we don’t overdue it, and we limit it to one day.  Particularly with all the flus going around, I don’t want my kids’ immune systems suppressed by all that sugar.  If you don’t want to do all candy, you could also make cookies, gummy snacks (I have molds in the shape of spiders and bugs), root beer floats, cupcakes, or the like instead.  We didn’t have time this year, but my kids would have enjoyed making them I’m sure.

So what do we do with all that leftover candy?  If we’re running low on candy that night, we’ll give it back out.  My 2 and a half year old loved handing out his candy.  He’d run to the door, then tell me afterwards, “I share my candy with the kids!”, very proud of himself.  With the rest, my husband takes some of it to work, and we give some to our babysitter.

There is a web site called http://www.anysoldier.com/ where you can get an address in the U.S. to send your Halloween candy (or any other goodies), and they will send it overseas (to Afghanistan right now I believe), and get it to U.S. soldiers.  They are always very happy to receive such treats from back home, and you can include a note from your children telling them you are sending them your Halloween candy as you can’t eat it.

One mom did this, and one of the commanders wrote a very nice letter back and their daughter was so touched by it that she still talks about it.  You could also drop it off at a women and children’s shelter or I believe a food pantry would take it too.

So, did my kids have fun on Halloween despite “missing out” on all the red dyes, artificial flavor, high fructose corn syrup, and preservative filled candy?  Well, as my 6-year old daughter was falling asleep that night, she whispered, “Mommy?  Can we go trick-or-treating again tomorrow?”  My 9-year old said it was the best Halloween ever.  I’d say they had a fun-filled day.  🙂

And the best part is, the days following Halloween, I don’t have screaming, crying, hyper kids running around and begging for more of their Halloween candy.  I remember those days – between Halloween and Christmas, I about lost my mind.  Then in January, we came to our senses (or maybe we came to the end of our rope) and found Feingold.  After that, we could truly have “Happy” Halloweens.  So, I think the only thing my kids “missed out” on this Halloween was having terrible reactions to chemical laden candy.   Personally, I don’t feel deprived, and I don’t think my kids do either.  Hope your Halloweens are happy as well!


To learn more about how dyes, artificial flavors, and preservatives can affect your child’s behavior and learning, check out my book
“All Natural Mom’s Guide to the Feingold Diet – A Natural Approach to ADHD and Other Related Disorders” available now on Amazon for only $3.99! 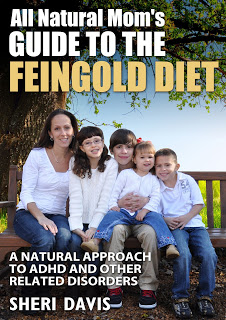