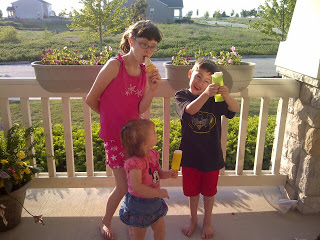 Just in time
for summer.  Homemade popsicles!  My kids love smoothies and popsicles.  Smoothies are great for hiding supplements in
so we make them often.  Whatever’s leftover,
I throw into popsicle molds.  I’ve
discovered with kids and food that it’s all about the presentation.  Put anything into a cool looking popsicle
mold, and they’re going to love it.  The
neighbor kids are gonna love it too.  I’m
always asked, “Where did you get those?”
They have
some really cool ones on Amazon now.
You can get a few from local stores like Bed, Bath, and Beyond.  We got the ones that look like push-ups
there (seen below).  You can fill these with ice cream
or smoothies.  Juice doesn’t work as well
with these because they tend to drip as soon as you fill them.   My
kids always liked these the best until we just got new ones. 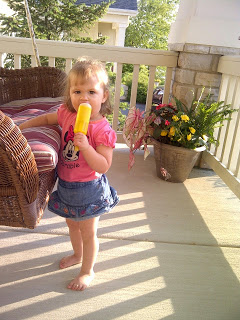 We just got
some Kinderville silicon ones that are the push up type too that they are now
fighting over (the one my son is holding).  These are nice because
they don’t drip and they have a lid so if they don’t finish it, you can just
put the lid back on and put it back in the freezer. 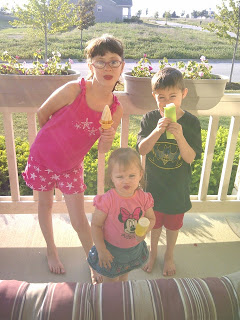 Then there
are the ring pop looking ones by Tovolo.
These are more of a novelty because they hardly fit very much liquid,
but the kids love them. 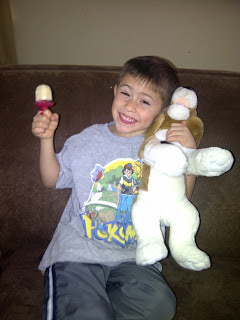 Then we got
some that look like ice cream cones.  The
base of the popsicle is a plastic cone and then the popsicle mold is in the
shape of soft serve ice cream.  My 8 year
old daughter loves these.
We bought
some from Whole Foods once that are the silicone ones.  The nice thing about these is the top just
peels right off.  You don’t have to run
these under hot water, so the kids can open these themselves.  The bad part?
The plastic portion that holds the popsicles while they are freezing is
of very poor quality.  We only have two
left that we can use because the popsicles got dropped coming out of the
freezer and the plastic broke.  But, I
like the shape of these.  They’re like
those big rainbow unicorn sucker pops.  I’ve
read several reviews on Amazon that said the same thing of this brand, but also
of other brands of popsicles.  So, just
be careful taking them out of the freezer.
Don’t drop them on the floor.
Easier said then done when it’s the kids that are usually pulling them
out of the freezer.
We have a
large upright freezer with plenty of room for freezing popsicles but you might want
to take that into consideration when you purchase popsicle molds.   Some people don’t have the room for them.
Then there
are popsicle molds specifically for babies and toddlers.  I love the ones we have but I couldn’t find
them on Amazon anymore for some reason.  They
are a nice size.   Perfect for a toddler,
and they have a good drip catching design.
If you have a baby not ready for regular popsicles yet, you can make
just water popsicles.  Great for teething.  I filled my baby’s with homemade baby food like
pear raspberries or pear blueberry raspberry.
She loved them.  I also used the
smoothies that I make for my other kids which contains coconut milk, banana,
and pineapple.  This is nice for babies
because it won’t stain like blueberries.
My daughter rips off any bib I put on her so now I just take her shirt
off when she eats something messy.  Doesn’t
work quite so well in restaurants though.
J 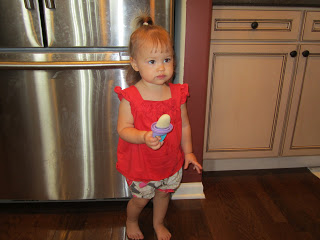 So, what do
we put in our popsicles?  Most of the
time I use our smoothies which are about a cup or so of coconut milk, about six
2-inch pieces of frozen banana, and about two slices of frozen pineapple along
with some of the juice.  If the blender
gets stuck and it’s not thin enough, I just add a little more coconut milk or
water.  You could use regular milk or
rice milk too if you wanted.  Occasionally,
I’ll add a scoop of So Delicious Vanilla Coconut Milk Ice Cream to it as
well.  Then I usually add about half to
one teaspoon of flax seed powder (or ground flax seed) after I’ve blended
everything.  The kids don’t even notice
and you can’t see it.  Then I’ll add any
vitamins I want to add to it.  Without
the kids watching of course.  J
If I have some flax seed oil, I’ll add a squirt of that instead of flax
powder.   Nutiva Naturals is a new brand that I really
like.  Whole Foods and the health food
stores carry it now.  It’s usually near
the vitamins. 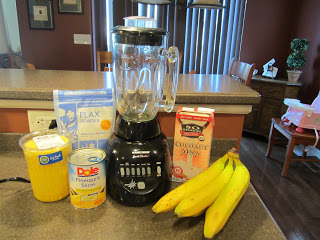 For my
frozen items, I’ll break some bananas into two-inch pieces and store in a zip
lock freezer bag in my freezer.  Make
sure you write the date on the bag.  For
the pineapple, I sometimes use fresh pineapple cut into chunks and frozen, or
if I don’t have any because they’re not in season, I’ll use Dole pineapple
slices in 100% juice or whatever doesn’t have corn syrup.  I use about 2 slices at a time.  The above recipe will make about 3 kid size smoothies.  Adjust to taste.  This recipe is Feingold stage 1, although
bananas are a medium salycilate, so might not want to be eating them every day.
We’ve put
just lemonade into popsicle molds.  We
use either Oberweis (here in the Midwest), or Simply Lemonade.
Another
really good smoothie recipe is some frozen strawberries (I freeze some fresh
ones when they go on sale), and orange juice (fresh is best or organic).  I just use enough of each to get the proper
consistency.  If you want it sweeter,
just add a little sugar.  This is my favorite.   Adding grapefruit to that mix is really good
too.
Another good
one is lemonade and strawberries.  Whole
Foods sells this and it is SO good.
These two recipes would be Feingold stage 2.  My younger kids would go nuts on these.
Anyways, get
some cool popsicle molds, google some recipes if you want, and start making
your own popsicles!
Written by Sheri Fortes - Visit Website