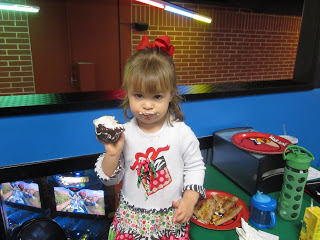 We just
celebrated my son’s 6th birthday yesterday.  Thought I’d share how we have
celebrated our own birthdays Feingold style.
First, I
always print my own invitations.  This
has absolutely nothing to do with Feingold.
J
I just hate writing out each individual invitation.  I steal wording off of online birthday
invitation web sites.  They have some
really cute ones that can go along with whatever theme you are doing.  I print them out on cute stationary.  For a 1st birthday, I’ve put
several pictures of them throughout the year on it.
This year,
my son wanted Minecraft invitations.  In
case you don’t know what Minecraft is, it’s a computer game that is highly
addictive.  His older brother got him
hooked on it.  I’m sure most of his
Kindergarten classmates had no idea what Minecraft was, but oh well.   He was happy as a clam with his
invitations.  I found them online.  They had a free PDF download of it.  My neighbor scanned them for me and then
input all of our information on to it.
They turned out really nice.   (For some reason, the link to it doesn’t work
anymore.) 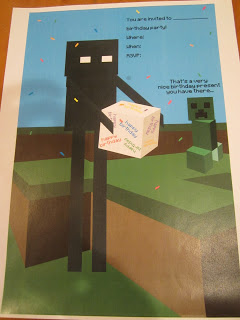 If you’re
doing a party outside of the home, they usually provide the pizza and pop.  We did a Lazer Tag party yesterday.  I let all the other kids eat that pizza and I
had a pizza delivered from Papa John’s for my kids.  Papa John’s is no longer in the Feingold
Shopping Guide (they may have stopped filling out forms) but it was approved
for years.  We don’t do pizza anymore (now
mostly GFCF) but when we do, we go with Papa John’s.  I ask them to sub a pizza sauce for the
garlic dipping sauce.   Then we take digestive enzymes for gluten and
dairy (AFP Houston Enzymes).
My kids are
used to getting water when we go out to eat so they’ll order water but I also
bring along lemonade juice boxes from Trader Joe’s (not in the shopping guide) or Knudsen pear juice from Whole Foods.  Or we just bring our own lemonade (Simply
Lemonade) in their sports bottles.  For
my older son, I sometimes let him order Sierra Mist (has corn syrup) or I’ll
bring along a pop like 365 Lemon Lime or Root Beer.  If I provide juice boxes for all the kids, I usually pick up a case of Apple & Eve juice boxes from Sam’s Club (stage 2).
And then there’s
the cake.  Lately we’ve been going with
cupcakes.
For my son
this year, I picked him up a GFCF and egg free cupcake from Whole Foods.  They are made by a local bakery (Swirlz in
Chicago).  They have chocolate cupcakes
with vanilla frosting.  So, I ordered 12
cupcakes from Wal-Mart (they are peanut free in case you have kids at your party
with a peanut allergy).  I had them put
white frosting on all the cupcakes with no decorations and no sprinkles.  Then I took one of the cupcakes out and
inserted my son’s GFCF cupcake in with the rest. 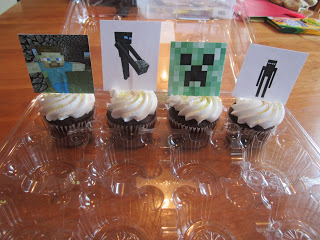 I went
online and searched for pictures of Minecraft.
My son helped pick out which pictures he wanted.  I right clicked on the pictures and then
saved them to my picture files.  Then I
opened up Word, clicked on “Insert Picture” and inserted the pictures and then
resized them.  I made them small enough
to fit on top of a cupcake.  We laminated
them and cut them out into squares.  Then
taped on toothpicks and put them on top of all the cupcakes.  I also laminated ours because we have a laminator ($27 at Sam’s Club).   I sprinkled all the cupcakes with green India
Tree sugar crystals.  He didn’t even
notice that his was different!  J   Cupcakes
are now my dessert of choice for birthday parties.
Here’s a link to some Angry Bird cupcake toppers. That would have been his second choice if we couldn’t find anything for Minecraft.
http://www.thepartyanimal-blog.org/Downloads/Angry_Birds_Cupcakes_Toppers.pdf
This blog has some really cute ideas for birthday parties.

Last year, my daughter wanted a Monster High party, so I found some really cute free PDF downloads for cupcake decorations. They were circle cut outs of different Monster High dolls. You print them out, then cut out each one, tape a toothpick to the back of it, then stick it into a cupcake.

I ordered regular cupcakes from a local grocery store with pink frosting. Then I made my daughter strawberry cupcakes with pink strawberry frosting. I stuck the same Monster High decorations on to all of the cupcakes. Her cupcake wasn’t the exact same color as the others but she was happy getting to eat a strawberry cupcake (we usually avoid high salycilates with her). 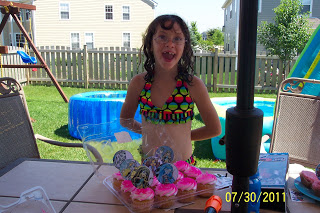 We’ve done
all kinds of things in the past.  One
year, we did ice cream sundaes.  I
brought Breyer’s Ice Cream (recently taken out of the Feingold Shopping Guide
because they refuse to fill out forms anymore), Magic Shell chocolate topping,
homemade whip cream (I have a Whip-Eez dispenser), and now they have all
natural maraschino cherries at Whole Foods (Tillen Farms).  They have ice cream sprinkles at Whole Foods
too if you want that.   There are lots of simple recipes for homemade
chocolate syrup too.   This went over
really well with the kids, especially after getting really hot doing gymnastics
in the middle of summer.  My son thought
it was so cool to stick a candle in his ice cream sundae.
One year,
when we first started the diet, I ordered a cake from Whole Foods.  Not only was it expensive (about $30), but it
didn’t taste all that good either.  My
kids liked it of course – anything with sugar.
I thought it was OK.  So, that was
the last year we did that.
Other years,
I have bought a regular cake for the rest of our guests (my son wanted Spider
Man one year when he was about 3).  Then
I’d make another cake that was clean.  That year, I saved the big plastic Spider Man
they used to decorate the cake and put it on his homemade cake the following
year.
Duncan Hines
makes a chocolate fudge cake that is Feingold approved but it has corn syrup
(it’s called Moist Deluxe Cake Mix: Dark Chocolate Fudge).  Sometimes, I’ve just made this for everyone,
and also served a triple berry pie or something else.  It just depends how many guests we have.  If we have a lot of quests, I tend to offer 2
or 3 desserts.  My kids don’t feel so
much like they are not getting the dessert that everyone else is having.  They’re just getting one of the desserts.
One year, I
made ice cream cake.  This was for my
daughter’s birthday and she was GFCF and egg free.  So, I made one regular ice cream cake, and
then I made her and my son a small one that was gluten and dairy free.  Looked the same as the other but they know
they can’t have regular ice cream.  I
usually don’t give them chocolate so they didn’t complain at all.
http://feingoldrecipes.bettyrider.com/2012/09/21/ice-cream-cake/
For my
daughter’s 1st birthday, I just gave her a GFCF banana muffin with a
little frosting.  I wasn’t crazy about
the idea of giving her a cupcake with all that sugar and no nutritional
value.  I had looked up how to make a
cake out of watermelon and fruit and almost attempted it, but I didn’t have
time.  They looked really cute
though.

For goodie
bags, we’ve done all kinds of things too.
I’ve ordered little toys from Oriental Trading before.  I’d put Yummy Earth suckers or Surf Sweet gummy
worms in the bags.  One year, when my son
had a movie theater party, I gave each kid a bag of gummy worms for the
movie.  I brought my kids their own
popcorn, and let the other kids have the theater popcorn.  Sometimes we’d put Annie’s fruit snacks in
the bags.  We don’t do too much candy.  If I can find a cheap toy, sometimes we just
give out a small toy and call it a day.
This year,
we went to the dollar store and found little banks in the shape of a Tootsie
Roll with Tootsie Rolls inside.  They
were only a dollar so we went with that.
No goody bag needed.  Tootsie
Rolls are not Feingold approved but I don’t worry so much anymore what the
other kids are eating – as long as they don’t come home with me.  J
Tootsie Rolls are my kids’ favorite non-Feingold candy.  They almost always pick these as their one
Halloween candy they get to eat.  So, I
told them they could eat only one, then save the bank to use. 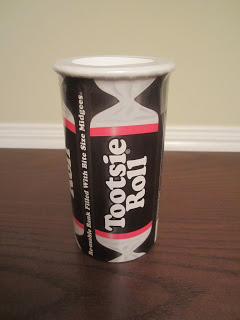 If we’re
lucky enough to have their birthday fall on the same day as their actual
birthday, I don’t have to make another cake.
But, we weren’t so lucky this year, so I’ll probably be making a cake or
brownies on Tuesday.  I used to make a
yellow cake with butter frosting for every birthday (but now we are GFCF).  L
http://feingoldrecipes.bettyrider.com/2012/07/14/yellow-cake-with-butter-frosting/
This one is
surprisingly good.  It sounds like it
would be really plain but it’s actually really good.  Sometimes I make it in a bunny mold I got
from Wal-Mart.  I decorate it with St.
Claire tarts, India Tree sprinkles, Surf Sweets jelly beans, and googly eyes I
got from Wal-Mart’s craft section.
This past
summer, we spent the day at a water park on my daughter’s birthday and I forgot
about a cake to sing to her.  So, we
improvised.  We had some homemade
marshmallows so she stuck a candle in a big marshmallow and we sang to
her.  She thought it was hilarious and
loved it. 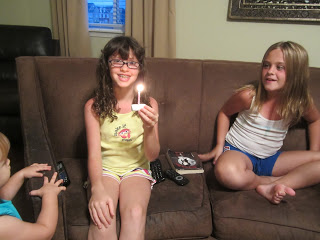 When my son
was about 8, we planned to have a waterslide birthday party outside, but it
ended up being cold and a little rainy.
So, that morning, I quickly put together a treasure hunt.  The kids had to follow clues and collect
certain things from that location.  I
buried little plastic gold coins in the sandbox.  They had to collect a certain kind of leaf or
flower.  They had to run to our neighbor’s
house and sing them Happy Birthday.  Things
like that.  I put the kids in groups of 2
or 3 and they had to race to be the first to find the treasure.  Each group had their clues in different
orders.  The final destination which held
the treasure was the mailbox.  My son
talked about this forever.  He thought
this was so much fun and wanted to have a treasure hunt every year.  I was just glad it turned out OK.  I didn’t know what to do with all those kids
in my house.
This summer,
I talked two of my kids out of having a birthday party and we went to Key Lime
Cove water park resort and Six Flags Great America to celebrate instead.  I like this option.  We would have gone anyway, but don’t tell
them that.  J 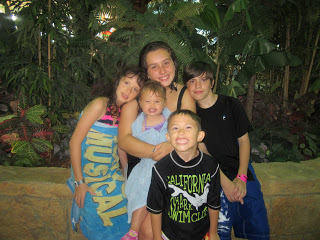 So, that’s
how we celebrate birthdays around here.
Written by Sheri Fortes - Visit Website