Below is a guest post from Rebecca at Die, Food Dye!
If you’ve ever wondered if food coloring affects your family’s health or behavior, check out my short list of symptoms that follows.  This is not the total list of all symptoms that arise with the ingestion of food dyes, but it’s a collection of the most common problems I’ve seen. Unfortunately, there is no allergy test for dye sensitivity, so you’ll have to use old-fashioned observation – More on that
below…
The food dyes I’m referring to are petroleum-based and will be listed on an ingredient label as Red 40, Yellow 5, Yellow 6, Red 3, Blue 1, Blue 2, Green 3, etc.  However, please note that some natural colorants like carmine and annatto cause serious reactions in sensitive people, too.
12 Signs Your Family Has Food Coloring
Sensitivity
Do you or anyone in your family exhibit these signs of dye sensitivity?
1.  Hyperactivity:  Can’t stop moving, runs most of the time, constant movement of hands and feet.
2.  Lack of attention:  Cannot focus either at home or school – without
affecting all areas of life all the time (not ADD).
3.  Sleep problems:   Has a hard time settling down for sleep, or has sleep disturbances throughout the night.
4.  Mood swings:  Unexplained
emotional problems, hours-long tantrums, inconsolable crying, paranoia, and
meltdowns over tiny things or schedule changes.
5.  Violence/Aggression:  Biting, spitting, growling, hitting, kicking, and uncharacteristic mean talk.
6.  Lack of impulse control:  Increase in risky behaviors, excessive talking at inappropriate times, loud talking,
disruptive, interrupts people a lot, hard to transition from one activity to another, does not adjust behavior in response to discipline.
7.  The Ickies:  Headaches, stomachaches, and vomiting.
8.  Bed-wetting:  This includes daytime wetting, well past the age of toilet training.
9.  Skin ailments:  Eczema and hives. My daughter had eczema and cradle cap before we eliminated dyes.
10. Breathing problems:  Some kids require an inhaler due to dye-induced asthma.
11. Compulsiveness:  Pulls out hair, eyelashes or eyebrows, picks at skin, repeats certain actions numerous times.
12. Not consistent: This is the single most important clue to watch for.  Can you give your kid
sugary treats without problems some days, but then other times, they freak out? Our clue was our daughter’s hyperactivity after eating sugar-free pudding that we later discovered had red dye.
We eliminated the ten symptoms my daughter had, out of these twelve, just by removing food coloring from our diet.
She is still a kid, and has moments of upset like anyone else, but she copes so much better now, and the upsets go away quickly.  Those days of nuclear explosions are long gone. Any parent of a dye-sensitive kid will tell you that their dye reactions are NOT normal kid behavior.  And most of them will joyfully relate their own story of how different their kids act after becoming dye-free. I’ve found that different colors cause varying symptoms for different dye-sensitive people.
For example, yellow dyes may cause hyperactivity in Kid A, eczema in Kid B, and
vomiting for Kid C.  Some kids can tolerate blue and yellow dyes without
symptoms, but react fiercely to red dyes.  More complicated still is the
fact that most petroleum food dyes don’t exist alone in any given food.
They are mixed with other colors, plus petroleum-derived preservatives
like Sodium Benzoate, BHT, BHA, and TBHQ.  Much more research is needed on
how the consumption of several dyes and preservatives affects the human body
over a lifetime.
Some food for thought…I’ve recently met more and more parents whose dye-sensitive kids started out as
severely dairy-allergic babies.  Some parents note that the once
life-threatening anaphylactic symptoms of babyhood have seemingly morphed into
behavioral problems after they thought their child had outgrown a dairy
allergy.
There is a theory that the added vitamins in cow’s milk are kept
from spoiling by the use of petroleum-based preservatives – which do not have to be listed on the ingredient
label.  My own dye-sensitive kid had abrupt and scary allergic reactions
to milk as a baby. This theory fascinates me, and I’d love to learn more.
Also, I recently read that most people – kids and adults alike – have at least one sensory processing disorder,
whether we realize it or not.  I can totally see that, and it helps me to
be more understanding of myself and others.  It’s my own opinion that
petroleum dyes exacerbate those issues, such as with picky eaters, and those
who are sensitive to loud noises and bright lights.
If you suspect or know that your child has a sensory processing disorder, it’s worth it to at
least try avoiding synthetic food coloring. I’ve even found theories connecting yellow dyes to carpal tunnel syndrome and arthritic symptoms.
Whether or not you have any of the symptoms, petroleum dyes are just not good for anybody.  We as
adults weren’t meant to digest them, and developing kids are especially
ill-equipped to deal with them.  Unfortunately, most dyed foods are marketed
to kids.
What You Can Do:
1. Try a food coloring elimination for just a week or two.   You can usually see a big difference
within just a few days.
2. Print this easy list of “Badditives” to take shopping, or pull it up on your smart phone.

3.  Remove dyes that are hidden in your home such as in cleaning and personal care products.See the post, “Places Petroleum Food Dyes Hide In Your Home.”

4.  Do a quick pantry purge to make sure that your family is absolutely not consuming any
dyes during your elimination test. Ask family, teachers, friends, and caregivers
to refrain from offering food and drinks that are not provided by you.See the post, “Revamp Your Pantry in 3 Easy Steps – Ditch the Food Coloring For Good.”
5.  Pass on face paints and temporary tattoos during your elimination period,
too.
6.  Avoid fake flavorings like “vanillin”, too, as these cause similar reactions in dye-sensitive kids.
My daughter gets the inconsolable Screaming Weepies for several hours
after eating fake vanilla in dips, cereals, cookies, sauces, cheap chocolate, and
drinks.
7.  Write down what your child eats each day in a FoodMood Log, adding notes about behavior after each meal or snack. When
your child is in daycare or school, compare your Food Mood Log with the
caregiver’s notes or behavior charts.  Try to spot any patterns. Rule out other allergies with an allergist if there is no change after a
dye elimination.
If you’d like to read about other parents of dye-sensitive kids to gain some insights, check out DFD’scollection of guestblogger stories.
I wrote about our own experience in Why I’m Over This Rainbow: Our Food Coloring Sensitivity Story.
Read about my discovery of my own problems with dyes in My Rainbow Connection – My Own Reactions To Food Coloring.   Dyes affect moms and dads, too.
For more help on living dye-free, visit the DFD Facebook fan page for up-to-date information and interesting content.
Have you experienced any symptoms other than the ones I’ve listed?  Tell everyone about it in a
comment below!
And please SIGN and SHARE my petition asking manufacturers to #DitchTheDyes from children’s
antibiotics, allergy and cold medications, pain and fever reducers, vitamins,
and toothpastes.

Rebecca is a homeschooling mom of one precocious, dye-sensitive child. She launched “Die, Food Dye!” in 2011 after uncovering her and her child’s reactions to petroleum-based “food” coloring. She and her daughter both train in Taekwondo, where Rebecca has just joined the leadership program. She likes art, music, British comedies, history, the outdoors, knitting, photography, and large amounts of (organic) chocolate.

Thanks so much for sharing Rebecca!

And for more information on avoiding food coloring and other “badditives”, check out my new book, “All Natural Mom’s Guide to the Feingold Diet – A Natural Approach to ADHD and Other Related Issues” available now on Amazon!

And check out my new fridge magnets as a great reminder of which ingredients to avoid. Available in my Shop here. 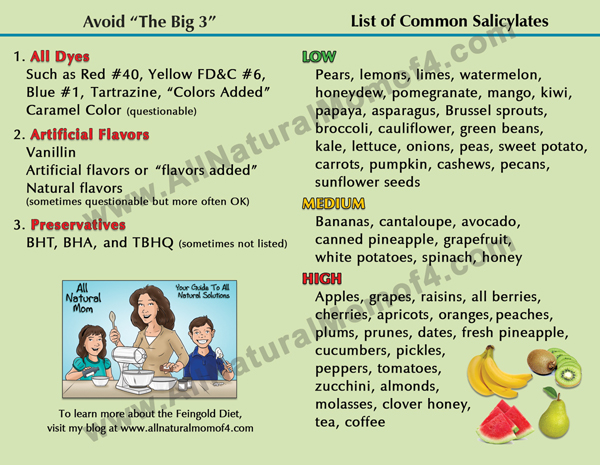